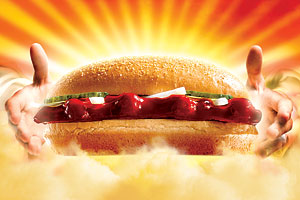 Yep, you heard it right. McDonalds released its famous and mysterious sandwich the McRib yesterday. This thing might be the nastiest looking slab of BBQ mystery meat on a fast food bun anywhere, but I fucking love it and you best believe I’m guna be waiting in line to get one of these artery-clogging atrocities. Let the cholesterol binge begin!

This commercial would definitely make me buy one of these babies.

What the hell just happened? This fake ref just waltzed through the sidelines and on to the field like he owned the place and no one stopped him? Like nobody noticed this dude was wearing shorts and a baggy ass ref shirt? I mean hey more power to the kid for getting through but you’re telling me nobody noticed the college-aged kid walking through the Arizona sidelines with ref clothes on? Big props to this kid for guts though. I mean he runs in, stops play by himself, then has the balls to ask the real ref for the ball. I mean if that’s not ballsy then I don’t know what is. Then he just takes off like a bat out of hell, no chance anyone caught him either because all the players were too busy bashing each others’ heads in. What an opportunity to get a few licks in though, when everyone is looking at the gazelle in ref clothes. Nothing like the University of Miami fight a few years ago though. Then again nobody is as thug as Brandon Meriweather.

Lindsay Lohan Shows Up Late to Coroner’s Office For Her Community Service.

So yesterday the lovely Lindsay Lohan got tossed back in jail again for doing something wrong. At this point it doesn’t even matter what the hell she did, if you guess drugs or violated probation you’re probably right. I am so tired of hearing about this bitch it’s ridiculous. I feel like she just gets arrested now to get some publicity even though the only people who still care is TMZ. Regardless of what she might think, Lindsay Lohan is no longer a celebrity. She’s just another bitch who had everything handed to her on a silver platter and pissed it all away. She can’t even show up to her community service at the morgue on time. Grow the fuck up Lindsay, this isn’t The Parent Trap anymore, you can’t just switch places with your secret twin. At least she’ll be with people who look like her at the morgue, that’s probably the only place she’ll be able to get it in anyway. Yeah I did just go there.

At least she’s still killin it in her mugshot

Nothing like this though. She had so much potential as a ginger. 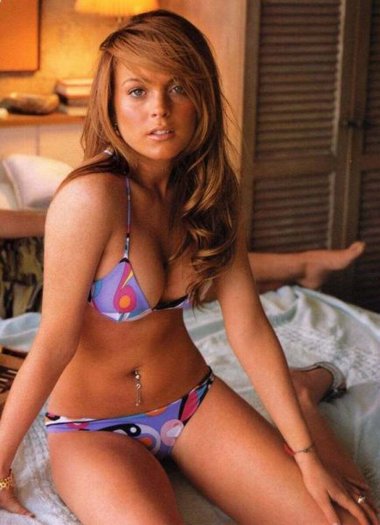 Fuckin Vancouver man, just a bunch of ass-holes. Their team doesn’t win the Stanley Cup, they destroy the city. An A-List actor is walking on the street and they beat the shit out of them. Just no respect. I don’t know how they do it in Canada but around here if the star of Transformers is walking down the street you dap him up for being in the same movie as Megan Fox and Rosie Huntington-Whiteley, being in Sarah Roemer, and being awesome in Even Stevens. If a guy like Shia is in movies with that caliber of smokes, then you shake his damn hand and show him some respect. Grow up Vancouver. 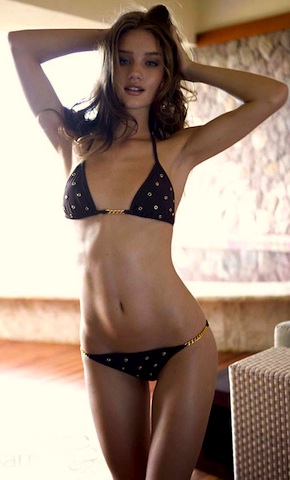 I rest my case.

Wait, Soulja Boy is still alive? How is this scrub still making news, and more importantly why does he still have bodyguards? it’s not like a crazed fan is guna attack him or anything, he doesn’t have any left. He’s probably making more money selling pot than he did when he was “rapping”. They should have started Cranking that Soulja Boy when they got pulled over, the cops would’ve turned the guns on themselves and they would’ve gotten away.

This kid probably has more money in that bag than Soulja Boy has left from that damn song.

A crash is one of the only reasons to watch NASCAR or IndyCar racing. Indy 500 winner Dan Weldon was involved in a horrific 15 car crash at the Las Vegas Motor Speedway. Cars were flying around the track like Matchbox Cars being thrown around by a toddler. There is something about this where you just can’t look away no matter how horrific it was. Weldon was only 33 and in the prime of a very promising racing career.

San Francisco 49ers – Niner Insider Blog – SFGate.com » Harbaugh celebration ticks off Lions coach – “Jim Harbaugh was elated after the 49ers 25-19 win. Harbaugh was leaping up and down and when he shook Lions’ head coach Jim Schwartz’s hand he slapped him on the back. Schwartz turned and snarled at Harbaugh, Schwartz chased him and then a skirmish ensued.”

What a debacle. Two teams that haven’t been on the right side of the scoreboard for countless seasons are finally doing well and they don’t know how to handle it. Harbaugh’s over here acting like he won the goddamn SuperBowl already and Schwartz is acting like a little girl who just got her dollhouse stomped by her older brother. Well now I can see why the Lions play the way they do, their coach is as scummy as they are. Take it down a notch bro it’s not like you’ve never done that. Harbaugh that was a weak showing but hey, I’ve been waiting to have the Lions put in their place so props to you big guy for stomping Jim Schwartz’s dollhouse.